Yellowstone River. Yellowstone National Park. August 19, 2015.  When I checked in with our guide Joe Moore about an excursion to the Yellowstone, he was clear that the hike that he had planned was not for those without stamina and strength. Even though all of us were 64+ years old, we didn’t think twice about it. Age is a funny thing. It sort of creeps up on you until you’re forced to recognize it because of stiffness or shortness of breath or really sore muscles the next day.

To reach the trailhead, we drove a couple hours in the park starting out in West Yellowstone and heading east past Towers Junction so we could approach the river from the east side instead of the easily accessible west side. It was on the east side that we would be in one of the wildest sections of the park and where we would find the most hungry and undisturbed fish. The hike to the river took about 90 minutes – not bad time wise – and although our guide seemed to bounce down the trail like a white-tailed deer, we edged our way down on loose gravel. Riverside, we scrambled over large boulders until we approached the northernmost point of the river before the Tower Falls.

My husband fished some dries by the edge of some granite cliffs coming up with a beautiful 20 inch Yellowstone cutthroat. I fished to a riffle in the middle of the river and came up with some 12-inchers. This fishing spot was so beautiful with water the color of that in the Caribbean, that we stayed for a long time joined by beautiful Harlequin ducks. After several hours, we made our way back until we found a large pool behind a huge boulder and the fun began. There must have been dozens of fish held up in this hole because one after another succumbed to the delicious allure of my foam pattern that resembled a Chernobyl ant. (Clear for all your non-fly-fishers??) The fishing was fantastic, the sky a royal blue and being in the back country was a thrill.

In the middle of this fishing frenzy, a couple on the other side of the river started waving at us. We thought they were cheering us on because of fishing success but we later heard that they had spotted a badger up on the cliff behind us! We missed seeing it, and I’m sure he was plenty scared of his encounter with us.

But, the charge for the day was an encounter with a Buffalo that caused quite the episode with Connie, who had been peacefully casting her fly in the middle of the river and didn’t notice this monstrous creature approaching her. With a frantic warning from the guide, Connie turned too quickly, fell and injured herself creating a hematoma the size of a baseball on her leg  ending the day for her and making her climb out to the car extremely arduous. We didn’t hear about her mishap until we met up with the other folks on the hike out, but we did watch the buffalo cross the river like it was a small brook in the mountains.

It was a day to remember and I hope to continue my yearly trek up to this amazing national park. Summers bring a mass of people, but the park is well-managed although you need to be patient with traffic that oftentimes occurs when someone spots an elk or bear or wolf. That’s actually what people come to Yellowstone to see. Personally, I like the fish. 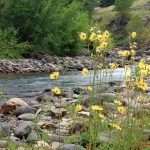 A Week in West YellowstoneFeatured 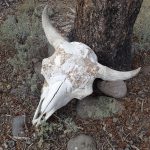