I am one of those people who have to live in a climate where there are four seasons. I grew up on the east coast and some folks back there would scoff if I said Colorado has four seasons, but I believe we do – maybe just not as pronounced as back east. I enjoy embracing the challenges that each of the seasons brings, but I find it especially exhilarating to be able to be outside in temperatures as low as I encountered this week. I know how short-lived this will be as evidenced with the temperatures in Denver this weekend.

So I have had a few friends ask me what I wear to stay warm for five hours in a river that’s 34 degrees and the air temp at seven degrees. From the inside out – first layer – tight-fitting capilene long underwear, wool socks. Second layer – Goretex or some other synthetic, wicking material for a turtle neck,  fleece pants and alpaca socks. Third layer – heavy fleece jacket, waders. Last layer – Patagonia down jacket, fleece neck warmer, ear band, aviator style hat with cushioned lining that has velcro that fastens under my chin, and then gloves with a flap over fingerless tips and my wading boots. I also have hand warmers in the pocket of my jacket when I need to get a little heat boost after releasing a fish or retying my line.

The reality is that before much longer I will have different kinds of issues to work out, e.g. hats, insects, cool clothing… So I choose to embrace the moment and not think about what the future will bring. I do think about the past because I think we can learn from our mistakes but try not to dwell on them. In the meantime, I will enjoy the stillness on the rivers and fish like it’s the last time.

Thanks Mike Kuberski for the photo of me! 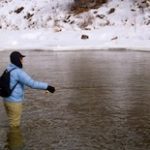 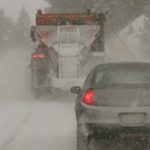 On to the TaylorPlus/Delta, Taylor River, The Rivers