Those of us living in the Rocky Mountains have been surprised by the early onslaught of winter. We had -20 at the Durango airport this week. The coldest weather in which I fished this year was at the Williams Fork last January when it was -11. Hopefully I’m not getting soft, but it really was too darn cold earlier this week.

I did get out for a few hours this week and am hoping with the upcoming heatwave (somewhere in the 30s) I’ll cast a few more lines. The Animas River in Durango is always a treat for me being my second “home waters” after the South Platte in Denver. This part of Colorado is so scenic and yet, like the history of so many rivers, the beauty of this river is deceptive. Although it is now a good fishery, it suffered from years of mining abuse. Although an angler can now see both wild and stocked rainbows and browns that average 12-18 inches, you will need to go the more popular holes to find these fish.

Much of the fishing is within the city of Durango and has an urban flavor, but Durango cannot really be called a city. It’s alive and bustling but only houses around 16,000 people. Much of the fishing north of town along Highway 550 is private although you can fish on the Southern Ute Reservation south of town.

Let’s see what this next outing brings. 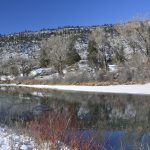 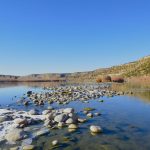