April Vokey is one of the most well-known fly-fishers in the world – and yes, surprising to some, she’s a woman. April is going to be profiled on the November 6 episode of 60 minutes Sports on Showtime. I met April at the Denver Fly Fishing show last December when she presented on a panel of women who are well known for a variety of reasons within the fly-fishing world. (Peg Misken – profiled in my Friends column – also presented at the Denver show.)

April has guided on the Dean River in British Columbia for the last 4 summers where she helps her clients seek out steelheads – a sea-run rainbow trout that usually returns to fresh water to spawn. I have not yet had the opportunity to go hunt steelheads but everything I hear about it excites me.

April has done a lot to bring women into the sport of fly-fishing and has been very active in her work to ensure the future health of rivers. She has a blog where she tells of her adventures and her life story.

I would certainly watch the show, but I’ll be fishing. 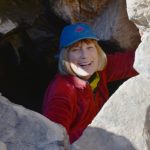 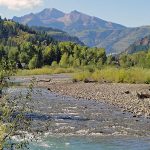 Good News on RiversIn Other Words