Last fall, Florian and I spent three weeks in Greece touring Athens, the Peloponnese, Santorini, Mykonos, Hydra, and finally the island of Crete. Florian lived on Crete 50 – yes 50 – years ago for a military assignment and felt as if he didn’t get enough time to really explore the island then or during our fall trip. And so, we decided that we would come back for a month, and here we are. We are staying with a very international couple – Andy is American with an English background, and Jocelyne is French, but speaks English, Greek, Turkish, and Spanish! Oh my, how colloquial we are in the States. 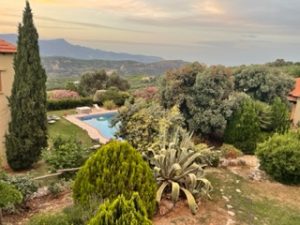 They own three homes on Crete, in a kind of compound, each with a swimming pool, that they rent out mostly to a circle of acquaintances associated with the now closed American military base. We found them, of course, on the Internet when we searched for connections on Crete with the base. Since I have a month to write about my travels and experiences, I will start with just showing some photos of this magnificent Mediterranean property.

The view from their property is of the foothills of Mt. Psiloritis, or Mount Ida, the tallest mountain in Crete.  The valleys in between contain an abundance of olive trees and grapes. There is still a little bit of snow on the top of Mount Ida! Yes, there is snow in Crete, in the heart of the Mediterranean. 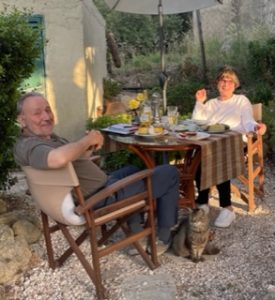 Every day we sit outside on our sweet patio amongst the birds and the bees and the flowers and the trees and eat local produce including tomatoes, cucumbers, apricots, melons, and of course OLIVES! Oh my, the olives. The property was bought about 15 years ago and was fairly barren of trees and other flora, but in this climate it has thrived. Oh, to be able to have the assortment of flowers that surround us here.

We are in a small town in the mountains southwest of Iraklion, the capital, called Pendamodi. In the time when the Turks ruled Crete, they divided up the various areas by the amount of taxes that were charged. Pendamodi got its name because it was charged a multiple of five (penda) modi (taxes) by the the Turkish government. At least that’s the story I was told! 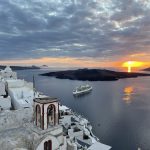 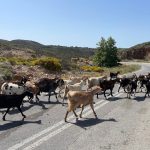