March 27, 2013.  The wind subsided around midday. I headed to the section of the Fremont River called the Bicknell Bottoms. A spring creek fed the river year round providing for a more consistent water temperature and the perfect environment for lots of insects… and fish.

There were several different fishing techniques to be tried. I started out near the road where sections of deeper water called for a little streamer action. As I’ve mentioned in earlier posts, I haven’t been very successful with streamers but thought I would try these fish-like imitations once again. I even tied on a black wooly bugger that I tied myself for good luck.

The warm breeze interfered with my concentration and I found myself distracted by the scenery that surrounded me. A pair of Canada Geese that I mistaked for eagles were fighting or mating in the distance. I flushed a blue heron and listened to the red-winged blackbirds annoyed at me for intruding in their territory.

The afternoon passed quickly without another angler in sight and my stomach growled as I thought of yet another great dinner that Dana would whip up being the great cook that she is. Even so, I wanted to check out one more hot spot that I needed to drive to. As I passed by the river, the lighting was such that you could see right to the bottom of the river and I spotted dozens of fish feeding. Dinner would have to wait.

I re-rigged my line as a simple nymph setup so I could get down to the river as quickly as possible. I had already taken off my waders and decided that I didn’t have time to go through that rigamarole. I pulled on my fishing boots which are purposely large enough to accommodate socks and waders so not a great fit without. I slogged down to the river feeling like a child in her parents’ shoes. As I slipped down a very reed-filled bank I ran into barbed wire. Damn. I could still spot lots of fish feeding and I didn’t want to go back and search for an area that would allow me to easily get over the fence. Bad idea.

I snagged my pants, then my net, then my line and ended up taking another ten minutes or more trying to extricate myself from my self-imposed mess. I finally found myself clear of the fence by falling down on the other side. OK, now I was ready to catch my first big fish of the day. I tried to be stealthy as I approached the river knowing that the fish were easily spooked. With oversized, unfilled boots, this was not to be. I finally got to a spot where I felt sure I would find a fish and cast a dozen or so times. I knew after that many casts any fish that would have been feeding was now under cover. Pull back. Trudge along. New spot. Same issue.

I noticed another hole that I could fish only from the opposite side of the bank. I knew my feet would get cold in the water if I crossed the stream, but I would be heading back soon anyway. I took a couple steps into the river and went to lift up my back foot when I discovered I had found cement-like sand. The thick mud captured my feet and there was no way I was going anywhere. Somewhere in the recesses of my memory I recalled that the only escape from this situation was to get down on my knees and work my way out that way. Without my waders on I wasn’t too excited about this approach, but I really didn’t have a choice. After another 10-15 minutes I found myself bank on the reed-covered sod.

At this point, twilight had fallen and I knew I had missed out on any opportunity to get a fish. I was cold and ready to admit defeat.  There were lots of lessons on this day – not only about fishing but life. 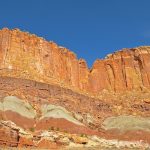 ReddsArkansas at Pueblo, Featured, The Rivers