December 18, 2014. The temperature was -20 at the Durango airport two nights before I planned my trip down to the San Juan River. I had fished in minus temperatures in January when I first started my journey, but hoped that I wouldn’t have to do it again. I lucked out when the high hit in the mid-thirties, which felt downright balmy.

Having a home in Durango, I had fished the San Juan several times before including a rafting trip through the famous Texas Hole. That really wasn’t my cup of tea –  lots of people floating in circles. So, I decided to try the “upper braids.” Unlike most other times of the year on the San Juan, I saw only one other angler all day.

I spent the majority of my day with streamers hoping to find some of the larger fish who had to rely more on eating other fish rather than insects. I still don’t have the touch with streamers. As I contemplated my next moves so I could see a fish or two on the river that day, it dawned on me that the fly known as the San Juan worm, one of the most ubiquitous flies in the sport, might be a good fly to use on the San Juan River.  Sure enough, on the second cast, I started to see results.

I found myself drawn to taking photographs, thinking about how I’ve enjoyed the photography as much as the fishing throughout the year. In some ways, when shooting photos, I feel even more in tuned with the greater outdoors because I’m not focused on just the water and the fish.

In the end, it’s all good. Just being outdoors, by myself, thinking about the bigger picture.

Can a year have passed so quickly? 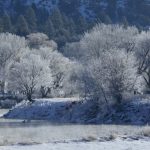 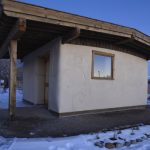 Without a DoubtIn Other Words