Cuisine is one of the most important aspects of any culture, and it’s no different here in Crete. As I’m sure you’ve heard many times, Mediterranean food is one of the most healthful diets you can eat – and Greek and Cretan food fall into this category. Eating here in Crete is about a lot more than just taking care of your hunger pangs, it’s really a kind of ritual. The experience of being in a taverna and eating food that is from somewhere nearby every day is life-changing. 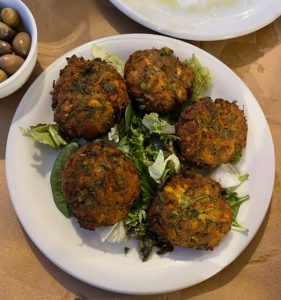 First of all, Cretans will never bring you a drink without serving you some food. Some say it’s to make sure you don’t get drunk, others say it’s because you’ll drink more if you have food in your stomach – probably both. Either way, there are always Mezes – or “flavorful bites”. They include cut up cucumbers with tzatziki spread, fresh tomato sauce with rusk, olive paste, local cheeses, olives, meatballs, cretan cheese pies, local breads, etc.  A mezedes dish is always representative of the local village’s abundant produce whether it is fish from a fisherman’s village or cheese from a mountain village.

One of my favorites is Dakos, also called koukouvagia in many places in Crete.  On a bed of special, traditional barley rusk, you’ll get chopped up tomatoes, olive oil, feta cheese, with oregano and chopped up kalamata olives. It’s a bit like an Italian crostini, but the bread is very earthy, making it so much richer. As I read on some blog, “While the special rusk starts off hard, the juices from the tomato and the olive, mixed with the fragrance from the oregano, the saltiness of the feta cheese, and the tanginess of the olive oils progressively soften it into a crunchy delight which you can’t miss.”

One night, Florian and I ordered snails, known as kohlioi.  Snails are considered a delicacy in Crete and are quite popular. Don’t be fooled though – they are not like the French escargots. We had them cooked in olive oil with vinegar and rosemary although they can also be served in an herbal tomato sauce. You pull them out of their shell with a fork – or a toothpick if you’re having trouble. They are more meaty than escargots and tougher. Their shells are colorful, and took some home for souvenirs! 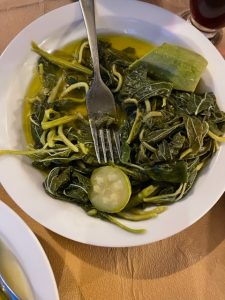 Crete has an abundance of wild greens or Horta, which you find on most taverna menus. Like spinach, wild greens are boiled for only a few minutes, and served with fresh lemon and a little olive oil. They are only served when in season and include such choices as beet leaves, chicory leaves, wild asparagus and a local variety call stamnagathi.

Another favorite of mine is a flat pie called Sfakia. They are a little like pancakes,  but they are made out of dough kneaded with raki and olive oil. Raki, of course, is an alcoholic drink made of twice-distilled grapes and anise. The Cretans fill them with either cheese or wild greens and then fry them. You’ll find them either as an appetizers or a dessert. If they are a dessert they’re filled with cheese and Greek honey on top. Really, really good!

The seafood in Crete is varied and cooked to perfection. One of the most popular dishes is seafood saganaki, usually with shrimp, although we’ve seen it with mussels and prawns as well. The dish is cooked in a pan with a base of olive oil, tomato, garlic, and an assortment of herbs. We also bought two large Sea Bass at the market for 5 Euros and cooked them on the grill after stuffing it with lemon, butter, parsley, and garlic and topping it with the same in a sauce. Honestly, I’ve never had it any better. Florian ordered a sea breen – a white fish that melts in your mouth. Of course, you always have to save a few bites for the stray cats who will love you for life.

Save room for the desserts and fruit and raki at the end of the meal, which is brought automatically.  The most important aspect of dining in Crete, though, is the fact that you will never, ever be brought your check until you ask for it, or made to feel as if you need to clear out of the table for another party. You are welcome to stay as long as you want. Such a wonderful way of life… 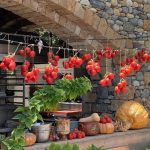 Tavernas – More than a Place to EatFeatured