The Rio Grande River in New Mexico was made a part of the National Wild and Scenic Rivers System in 1968 – one of the original eight.

In March 2013, President Obama permanently protected the Rio Grande del Norte near Taos by designating the area a national monument. This means the area and its wildlife will be protected from development.This is such a gift to this area and the people who visit.

Just north in Colorado, the Crystal River in Colorado was saved from the construction of two dams. A conflict had been going on for nearly five decades, but a compromise was reached in October by Pitkin County, American Rivers, and the water rights holders before the case was scheduled to go to trial. Like the Rio Grande, thought is now being given to have the Crystal River designated as a Wild and Scenic River as well.

The Crystal River is a tributary of the Roaring Fork River, which I recently fished and highlighted on the blog. It is one of the few rivers I have not fished in Colorado, but look forward to visiting it next summer. Let’s all work together to protect our rivers, our most valuable natural resource. 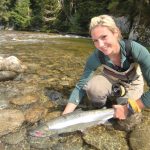