As I drive throughout the countryside, I am astonished by the various ways that the ranchers and farmers pile their hay. This photo was taken just east of Gunnison on my way out of town. In spite of the frigid temperatures that Gunnison residents must deal with, the town is enchanting. The fresh snow that we encountered made it a winter wonderland especially since the dirt from the cars and the salt or sand had not damaged nature’s artwork.

I have so many beautiful photos of my week on the Taylor. The rest of these photos were taken by my pals, Pat and Carol Oglesby. We compared cameras and had the never-ending discussion about the pros and cons of high-end DSLRs and point and shoots. Nothing’s ever perfect… right Megan??? 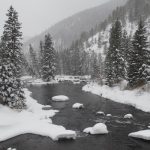 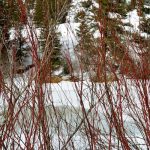 Off to the PanFeatured, Fryingpan, The Rivers