June 20, 2014. My husband Florian and I met David Hufman at the Grizzly Hackle Fly Shop in Missoula this morning. I had the pleasure of fishing with David last October under very different conditions on the Blackfoot. The Clark Fork ended up being too “big” and muddy from runoff, so we headed over to the lower section of the Blackfoot.

The area I fished in October was occupied by a Grizzly Bear and two cubs feasting on a dead carcass. A couple guides had the bear threaten them as they rounded a corner and unexpectedly ran into the Grizzly! It’s very uncommon for there to be Grizzlies in this part of Montana.

We saw all kinds of bugs rising up from the river and mostly fished with dries – both golden and salmon flies although we did catch a few under the surface with some girdle bugs and San Juan worms. We had a couple of double pickups throughout the day, but the photo here is of two really nice rainbows. Lots of west slope cutthroats – very cool.

It feels great to be back fishing in Montana – but nothing will ever match up to my amazing journey last year. Just need to make new pathways… 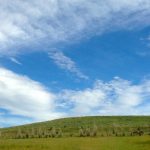 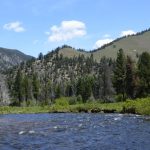