March 10, 2013. I experienced mixed feelings as I left the Colorado River near the Grand Canyon. The overwhelming beauty of the scenery and the people I met tugged on me as I got into my car and headed northwest to Utah. I have some roots in Utah because I lived in Park City as a ski bum in the early 70’s, and my sister, Susan and her husband, Jeff have lived in Park City for 40 years running Park City Signs.

My mood quickly changed as I crossed into southern Utah. The morning sun shone in splendor on the majestic sandstone cliffs while from some angles they were darkened in shade. I found it difficult to keep my eyes on the road and concentrate on my driving. My destination was Glendale, Utah, a spot on I89 that parallels the main north-south Highway in Utah – I15.

I planned to take the first two days to write some of the chapters for my book. Although I did spend my first day writing, mother nature presented me a beautiful snowstorm at the same time a flock of Cedar Waxwings passed through to gorge themselves on a crab apple tree with remains from last summer. I shot close to 400 photos and got some Audubon quality shots… if I do say so myself. Writing had to wait.

The rivers I will fish the next three weeks will be very different from the large tailwaters that have been the norm. The Sevier is Utah’s longest river extending over 360 miles within the state. There is only a small window of time in the spring when this river fishes really well and I will see if I have chosen wisely. Since it is not well-known, the chances for catching a big Brown Trout are promising.

I look forward to getting back on the river tomorrow. 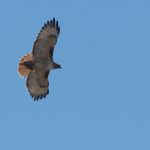 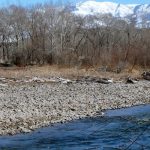