Snake River, WY.  Originally I had planned on fishing the Teton River this week, but with the drought and low water conditions, we decided to head over to Wyoming and visit the Snake River. We put in the drift boat across from Astoria Hot Springs and took out at West Table – just before the section with significantly more whitewater. I relearned the lesson of paying attention several times on this float. In fact, on my first cast I probably caught the biggest fish of the day, but it so surprised me that I dropped my rod in the water. How to impress a guide. I was able to retrieve it and we saw enough of the fish to see it was a good size, but it ended up throwing the hook before we could get acquainted.

August is simply a slow month for fishing and this river proved to be the same. I did catch several Snake River Fine-Spotted Cutthroats, which was a first. Right now, I’m really content to have one unique experience each time I go out on the river. Of course, in the end, every experience is unique.

We took a short field trip at lunch to a non-floatable side channel. We walked about 5 minutes to our destination and I happily emerged my legs in the shallow water to cool down. We found a nice hole where we knew a large fish lived. On my first cast – yes, those first casts matter more than you know – a fish came up to my hopper and I missed it. I didn’t get another chance after dozens of casts – no matter how precise they were. So, we moved on to a point closer to the intersection of the channel and river and found a hole with a gentle riffle. I had all of about 4 feet to make my cast and this time I was ready and successful on my first cast – again with a hopper. What a thrill!

Almost every river I have visited is beautiful in its own way, but this part of Wyoming is remarkable (or have I already said that many times before?) Throughout the day the river changed color – greens, aquas, and in the late afternoon more of a tan. We figured a thunderstorm must have occurred in one of the tributaries affecting the water clarity. We probably could have caught more fish with a couple of nymphs but I wanted to stick to the top of the water with the likes of water walkers, although we did use the occasional hare’s ear as a dropper.

One other thought. We passed Palisade Reservoir on our way and Derek reported that it is at 10% capacity. I know there are water cycles but over and over again I am seeing areas where I wonder how they are going to recover. I believe we need to remain vigilant. 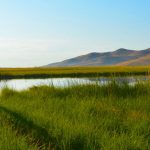 Row vs Wade: A Perfect SolutionFeatured, Silver Creek, The Rivers 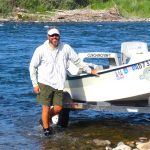