Derek Hutton and I met at a gas station in Alcova, WY on the first day we arrived to fish the North Platte. Derek and his father had planned a weekend father-son fly-fishing weekend. When his father observed that I was filling up our gas tank as my husband went in to get a cup of coffee, he had to comment that his wife would never pump gas if he was around! That observation started a conversation that led to me discovering that Derek guided on the North Platte in May and then headed over to his home in SE Idaho where he guides on the Henry’s Fork and the South Fork of the Snake as well as other rivers like the Teton.

We arranged to spend a day together and floated the North Platte below the Grey Reef Reservoir for about 8 miles and enjoyed some really good fishing. I think I’ve had it pretty easy the last 4 months with fish who have been half asleep when I reeled them in. Now, the finesse and strength are becoming more of a challenge. Not only could Derek oar like a pro, he offered me some really good tips helping me to refine my cast among other things. I am going to catch up with him again when I am in Idaho in August. Woo-Hoo!

Thanks for everything, Derek. 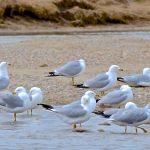 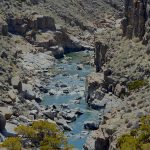