Telluride, CO is located in a box canyon and is one of the most beautiful spots in the Rocky Mountain west. Butch Cassidy robbed his first bank in Telluride in 1889 and got away with nearly $25,000. Telluride kept its kind of “bad boy image” through the mid-90s becoming known as a haven for drug smugglers but has shed that characterization to become one of the premier ski resorts. It is also known as a community that attracts the very wealthy although its rivers are not very rich with fish.

The San Miguel River and the Dolores River are within miles of each other just outside of Telluride and both of them are beautiful rivers, but have had some tough times when it comes to fishing. When I arrived in Telluride, I anticipated catching a prolific number of fish in this high mountain terrain. This was not to be the case.

My guide, Dave and I headed down Highway 145 closer to Placerville than Telluride. Our selected spot on the San Miguel was supposed to be a sure-fire spot but in the end produced only one rather bland-looking rainbow. Dave was surprised at the lack of action and when he heard that I had never caught a Brookie before, he decided that one of the tributaries into the Dolores was the place for us to pursue.

We passed an old cabin that the original owners still hang on to with a mining claim and made our way down to a beautiful, meandering, mountain stream. Dave filled me in on stories of the uranium mining that occurred in these parts. Evidently Marie Curie was the recipient of some of the uranium from here about and the first atomic bomb contained uranium from this area. A dubious honor.

I wondered about the fish I would catch in this pristine-looking environment, but I did not plan on keeping any of the fish anyway, so onwards we went. It took me three tries with a dry fly in different spots before I was able to land my prize for the day – a Brookie, and my mission was accomplished.

We tried other spots on the Dolores that day that were not fruitful, and Dave is dead sure that until a catch and release policy is put into place, the quality of the fishing at these two rivers will be compromised. It’s such a delicate balance dealing with nature and sports advocates. Most of the fisheries that are doing well learned a long time ago that in order to preserve the number of fish in the streams, a catch and release must be instituted. Hopefully this beautiful part of our state will implement that soon.

This post is late due to the fact that I didn’t have my photos from this river for almost 10 days because my computer fell out of my car but was returned by a kind soul with everything in tact. Thank you, Michael. 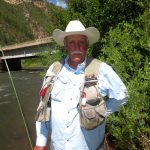 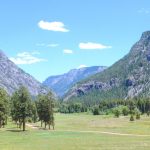