The starting point for rafters was just up river from where we camped,  and thus we observed quite a bit of river traffic from our campsite high above the banks. Small two engine planes dropped off all the gear as well as rafters in the early mornings. It was an unusual wake-up call for a wilderness area.

One of the more interesting stories concerns the sweep boats whose picture is highlighted in this post. These boats are unique to the Middle Fork of the Salmon and were originally constructed of wood. Pioneers floated them down the river and then took them apart to use the wood as cabins – thus the “river of no return.” There are no oars or other means of propulsion on these boats except the sweep blades, which also serve as tillers. When I saw them I imagined myself back on a river over a hundred years ago.

The stream was remarkably clear and thus the depth was deceptive. We found ourselves waist deep in several spots and had not yet reached our ideal wading spot. We used the full gamut of fishing options including hoppers, dry flies, streamers, and nymphs. We were probably most successful with hoppers and then streamers. The nymphs brought in a little fish 6 inches and smaller. These fish behaved as if they had never had the unfortunate experience of being held captive for a few minutes. I took off my nymphs after catching a few too many of these small frys.

On the first day we reached the river early enough in the morning to be quite successful. The river is known for its beautiful cutthroats, and we caught several of them although few bigger than 15 inches. I also got a few rainbows on the first day and Mike caught a small Kokanee salmon. At midday, the fishing shut down as the temperature reached into the 90’s. We headed downriver to hike up a tributary known as Indian Creek to see what we could find.

On the way we ran into a group of rafters who shared their lunch and stories with us. A family with friends getting together to celebrate a 70th birthday. I’m always a bit envious of families who choose an adventure like this to celebrate. In my family, we always headed to the city.

So much more to relate, but take a look at this video of a family rafting trip on the Middle Fork of the Salmon – it will definitely get your juices going.

Floating the Middle Fork of the Salmon 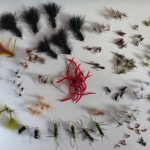