Antonito, CO. In the midst of rough and tumble sagebrush country, where the Cumbres & Toltec Scenic Railroad winds its way through remote country to Osier, lies the Rio de Los Pinos. Don’t get this river confused with the Pine River or the Los Pinos River east of Durango. Although both beautiful rivers, the Rio de Los Pinos has its headwaters in the Southern San Juan Mountains.

The river can be reached via the Cumbres & Toltec Railroad but my husband and I chose to take the four-wheel drive road to the rim above the river. Sporty, but doable. We passed the Osier Railroad Station that still operates as a lunch spot for the train travelers. This station was established in 1890 as a stopover for the Denver and Rio Grande Railroad.

We ran into one other group of anglers from New Mexico who headed upriver and so we headed downstream. Immediately we spotted some fishy-looking riiffles followed by some deep pools. We started fishing with a double nymph rod and messed with split shot to try and get to the bottom of some of the holes, but nothing in my first two holes worked. In fact, nothing in any of any of the holes worked the entire day.

My husband ended up catching one small brown, but I had to be satisfied with the beauty of the spot and the practice tying knots! 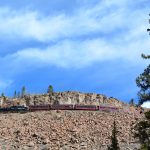 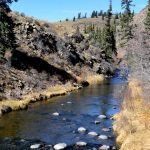