Idaho Falls, ID. June 1, 2013.  As I stood beside Idaho Falls, I had a rare moment when the Mallards allowed me to photograph them. This one male was particularly cooperative and so I watched him for about five minutes as he swam near the top of the Falls. I thought to myself, “You better watch out duckie – you’re going to be taken down by those falls,” but I had one of those “duh” moments as he flew off just as he reached the point where he would have been swept down. It looked pretty risky to me, but one creature’s risk is another creature’s norm.

Many people have commented to me about the risk I took by quitting my job and taking off this year to start anew. In some ways I feel like the duck taking off from the falls – it seems as if this is what I was meant to do.

I recently read “Salmon Fishing in the Yemen” and was struck by the following quote in the book. “If this project fails then you… can say that a poor foolish deluded woman insisted [on trying to] achieve the impossible. And no doubt some good will come from the work… Some new thing will be known that was not known before… and if it fails… the fault is mine because my vision was not clear enough or my strength not great enough.”

I already know that this project has not failed. The risk has brought more rewards that I could have imagined. 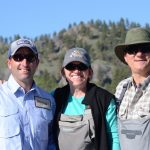 On the Boat RampFeatured Friends, Friends 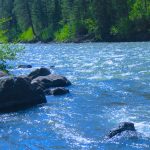