This week I’ve been fishing the South Platte at Deckers. Deckers has been an important destination for fly-fishers since the mid-1800’s after the Gold Rush. In fact it was named after a prospector named Steven Decker. As Roger Hill writes in his book, Fly Fishing the South Platte River, “From the earliest years of white settlement the South Platte has been used and abused.” One example of the abuse was before Colorado became a state in 1876 when a practice called “market fishing” took hold. This involved dynamiting stretches of the river to bring in large quantities of fish to market and make a living. It was this heinous practice that led to the development of private waters on the river. Unfortunately, the only native trout to the river was the Greenback Cutthroat, and that disappeared a while back.

The latest challenge for the river was the Hayman fire back in 2002. The ash and debris that resulted from that fire has caused huge challenges for the fishery. It is still a beautiful spot to behold and you can still catch fish, but it’s no longer in its heyday. Today I had my friend, Kate (best vet in Denver), come and hang with me. It was great to share fishing and personal stories as we basked in the sunshine and tried to spot fish. Come join me – you’ll be enraptured. 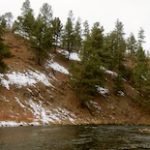 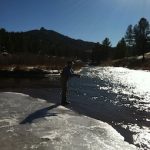