I’m three for three now. That is, I’ve taken at least a week every summer for the last three years to fish in West Yellowstone. This year, we rented part of a house with friends Scott and Connie Voss and Carl and Linda Curtiss. On the first of five days, we arranged to do a float on the Madison, and the river didn’t fail to disappoint me… again. I know this magical, heralded, icon of fly-fishing is a fantastic river, but I have yet – after four floats – had a good day on it, both because of weather and mediocre fishing. On this day, the temperature had dropped to the low 40’s in the morning and never really warmed up, especially because of the north wind coming straight at us. And me in flip-flops. The guides worked really hard for us, but the fish were not going to cooperate come hell or high water. And so, I didn’t convince either Connie or Linda that fly-fishing was the amazing sport that it is.

Fishing on the Gardner

The next day, Florian and I headed off to do a section of the Gardner River in the Park. Again, it was a blustery day, but I suited up with waders and several layers of fleece, etc. We were determined to fish on top of the water, and we did for most of the day, except for one exceptional spot about a quarter mile up stream near some modest-looking cliffs in a pool that had formed after a little waterfall. Joe Moore, our guide for the third year in a row, tied on a dropper and with a few precision casts next to the cliffs but not in the fast water, I caught a beautiful brown that had obviously been hiding out there for quite a while. Shortly afterwards, Joe took off to scout up stream, and as soon as he left, I had another nice sized fish on. I was standing among large boulders by the edge of the river and didn’t have a net with me, so I had to try and maneuver the fish over to a landing spot a bit downriver. Fortunately, in the middle of all this, Joe returned with his net and yelled over the cascading waterfall for me to swing my line around to him so he could bring the fish in. Unfortunately – or rather fortunately because he didn’t see me – I stumbled on a boulder and couldn’t for the life of me get myself up!  I did all I could to hold my rod up in the air –  for the health of the rod… and the fish. When Joe finally looked around and realized I was on the ground, trying to get up,  we lost the fish. But no worries – it was a great catch on a relatively small river. Two days down, but it was the next day – on the Yellowstone in the Park, that we had the best day of our vacation. 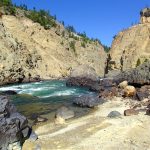