Up near Parshall, Colorado, there’s a river that’s not well known, but is one of the most beautiful places to fish in the Colorado River Valley. I picked this river – the Williams Fork –  to fish right now because it’s relatively close to my home in Denver and also because I can fish it this time of year because it’s a tailwater. It’s really a river I will need to come back to once the weather is a little warmer because the river is only running at about 43 CFS (cubic feet per second), which is quite low and makes for difficult fishing. The next few days will actually tell that tale. As a comparison, in the summer, the Williams Fork can flow at up to 1000 CFS because it is such an extremely high gradient river.

The river only flows for about 2 miles out of the Williams Fork Reservoir before it meets the Colorado River. An angler needs to walk up along the Colorado to reach the confluence where she can then walk along the banks of the Williams Fork looking for some of the deeper holes or other spots that a fish might be held up. I’ve brought my snow shoes, but I don’t think they are going to be needed this winter.

The Williams Fork is known for its Brown Trout. They are one of the most yummy looking fish in that they are a “chocolately”- caramel color with some gorgeous red and black highlights. Brown Trout are originally from Europe. As a bit of trivia, the largest Brown Trout caught on record was in Michigan in 2009 at 41 pounds! I don’t think my repaired rotator cuff would allow that to happen. Excited to see what I catch tomorrow on some eggs and nymphs. 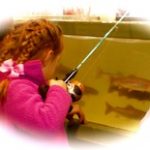 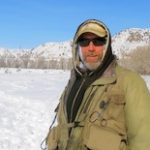