Besides being one of the best trout fisheries I have ever visited, the Missouri River also provides history buffs with some impressive landmarks and stories. The Lewis and Clark Expedition is known to have passed through Southwestern Montana in June and July of 1805 including spots where I was fishing. The journals of Meriwether Lewis describe their exciting “Corps of Discovery” – a mission to explore the Louisiana Purchase and claim the Pacific Northwest.

At one point my river guide pointed out Eagle Rock, which is the photograph for this post. In the Expedition Journal for the Lewis and Clark expedition, a large rock above their campsite is referred to as, “at this place there is a large rock of 400 feet high wich (sic) stands immediately in the gap which the missouri (sic) makes it’s (sic) passage from the mountains… and from it there is a most pleasing view of the country we are now about to leave. From it I saw this evening immense herds of buffaloes in the plains below.” Lewis is famous for his spelling errors but greatly admired by the likes of Thomas Jefferson who wrote of him, “of courage undaunted, possessing a firmness and perseverance of purpose which nothing but impossibilities could divert from its direction.” Interesting that Stephen Ambrose entitled his book about Lewis and Clark Undaunted Courage.

Although I didn’t climb the rock I was able to look out over the plains and imagine herds of buffalo and elk with beaver dams and other undisturbed wildlife. I felt privileged to have a peak into the past and think about the courage of these pioneers who settled this country that we now call the Rocky Mountain west. We have not been good stewards of these natural resources that provide us with so much although many organizations are trying hard to influence the public at large and our legislators not to be so short-sighted. If you haven’t started your bucket list yet, these grand western rivers should be somewhere in the lineup. 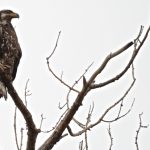 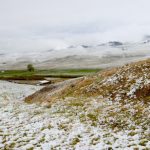 May in MontanaFeatured, Missouri River, The Rivers