I just finished reading Jennie Fields, The Age of Desire, a novel about Edith Wharton’s life but highlighting her torrid love affair with Morton Fullerton. Although I am no expert on Edith Wharton, you can certainly see the connection between this affair and her writing in Ethan Frome. Also, funny I didn’t remember that Ethan Frome’s wife’s name is the same as the street I live on – Zenobia – also a Roman Queen. Just a little trivia for the day.

As I try and learn about the thousands of insects in our waters, e.g. there are over 2500 species of Mayflies alone, I am fascinated by their life cycles. They differ from one insect to another, but Mayflies are particularly interesting. Their immature stage or “nymph” stage lasts about one year in fresh water. They moult 20 – 30 times throughout this stage and then their wing pads darken kind of like a fleece vest. They then acquire wings and unlike any other insect moult one last time during a stage where they are known as “duns”. For anglers, this is key because fish love mayflies at this stage. Pretty much the adult’s raison d’être is reproduction and they do this and then die in one day – thus their familiar name – “one-day fly.” They mate in the air after which the females drop to the water and the cycle begins again. And so it goes.

Tomorrow on the Blue River, in addition to fishing with some mysis shrimp flies (see yesterday’s post) I will be using some Mayfly (Baetis) nymphs. More about nymph fishing in another post.

Thanks to aquatic biologist, Rick Hafele, for some of this information. I took an entomology class from Rick, who lives and works on the water in Portland, and is the author of several books. 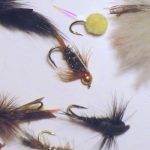 Mysis Shrimp on the BlueBlue River, Featured, The Rivers 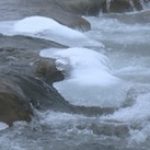