My husband has flown a small plane for years and I have refused to fly with him, but for some reason, this felt different. Sorry Florian. Something just seemed right about this whole deal, and in fact my intuition served me well once again. Mike Hart is one ace pilot.

I really wasn’t afraid at all of flying and in fact loved having the view and freedom that the plane offered us. We headed up to Indian Creek landing strip, a spot that can only be reached by plane, foot, or horseback. How cool is it that it only took us an hour to get there?

The smoke from the forest fires west and south of us was thick and intimidating. The view of the Sawtooth Mountains to the west of us was almost completed obliterated by smoke but our destination point was relatively clear.

As we flew towards the landing strip, it was obvious that this is not the first time that fire threatened this area. The burned trees in this photo were from a fire thirteen years ago.

I can honestly say that I hardly knew we had landed. Mike put us down so gently that I became an immediate convert to small plane travel (of course it helped that we had a bluebird day and flew in the morning.)

What a grand entrance to an amazing weekend. And then the fishing began…. 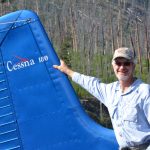 An OutlierMiddle Fork of the Salmon, River Guides, The Rivers 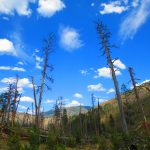 Beautiful CountryMiddle Fork of the Salmon, Plus/Delta, The Rivers